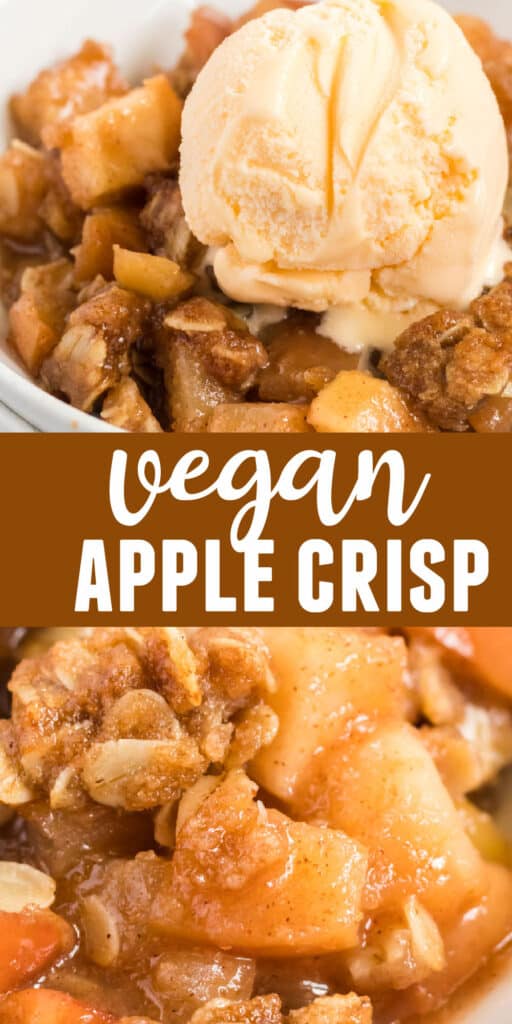 The best vegan apple crisp you’ll ever eat! Perfect with a scoop of vanilla ice cream on top. This easy vegan apple dessert comes together in just 15 minutes and is a fall must have.

Vegan apple crisp has become one of our most treasured fall favorite desserts.

We make it every year, and even our non vegan or vegetarian family members request this recipe!

This dairy free apple crisp is sure to please your family, and it comes together in just minutes.

It’s high on our list of fall favorites along with these apple crisp bars and gluten free apple crisp.

How to make vegan apple crisp

Step 1: dice the apples into chunks and place in a large mixing bowl. You will need around 6 medium sized apples, or about 6 ½ cups worth of diced apples.

Step 2: Add the remaining filling ingredients to the same bowl as the apples: lemon juice, sugar, cinnamon, salt, and corn starch. Give it a good stir and let it sit while you work on the crisp topping.

Step 3: While the apple filling marinates, prepare the crisp topping. Melt the butter and coconut oil in a microwave safe bowl.

Step 5: Bake the vegan apple crisp at 350 degrees for around an hour, until the apples are bubbly on the edges and the crisp topping has started to brown and crisp up.

Step 6: Allow the apple crisp to cool and rest for around 15 – 20 minutes before serving. Serve warm with a scoop of vanilla ice cream on top!

My very picky 17 year old vegan daughter made this recipe for us and it’s the best dessert we’ve ever tasted! Thanks for sharing! – Keri

This recipe has restored my faith in the Internet. There is no better place to put your freshly-picked Honeycrisp apples than here. I was never into oats as a dessert ingredient, but this is a real game-changer, and *very* easy to assemble – Laura

The apple filling becomes bubbly and delicious and the crumble on top gets a little crisp on it towards the end.

The crisp topping is so deliciously addicting! So crunchy and the perfect complement to the melt in your mouth apples. The best dairy free comfort food dessert.

Are you making this recipe? I want to see! Don’t forget to tag me on instagram @buildyourbite and hashtag #buildyourbite with your recipe creations!

Be sure to pin this recipe for later and follow Build Your Bite on Pinterest for all the latest delicious recipes!

Did you make this recipe? Be sure to leave a star rating below!

Did you make this recipe?

Second time making this and it’s my favorite recipe for apple crisp. I used flour instead of cornstarch at a 1:1 ratio because that’s what I had on hand, use pink lady or honey crisp apples and even added about a quarter cup chopped pecans once just because I felt like it. It’s the perfect filling to topping ratio! Thank you so much for this recipe.

I'm so glad you enjoyed it Kelley. Thanks for taking time to leave a comment!

Made this today! Omg!!! Sooooo yummy! Thanks so much for sharing this recipe. ❤️

hello! i know you've received quite a few questions regarding which apples can be used, but i just want to make sure! can i or cant i use red apples?

also if i have old fashioned oats instead of rolled oats, will the recipe still work?

Red apples should be fine, and old fashioned oats are the same thing as rolled oats :)

Thank you for this great recipe! I made this for Thanksgiving for my family for the 2nd year in a row. My 3 adult children are all vegan some of us are not but all love it equally. I made it the day before and warmed it up to serve.

I'm so glad you and your family enjoyed the recipe!

searching for a recipe?

Hi, I'm Joy. I have been in the kitchen creating new recipes since I was a teenager learning to cook. I enjoy creating recipes that are mostly healthy, always tasty, and family friendly!

Learn more about me →